I finally started to use the new web site.

I think it's easier to read and I'll be able to do more with it as time goes on. Go check it out and let me know what you think of it. --ST

A Night at the “Instrument Petting Zoo” 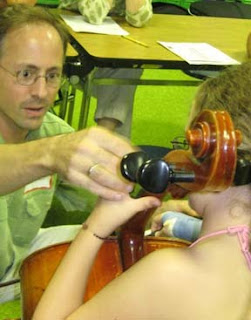 Billed as the “Instrumental Music Information Night,” the Arlington Public Schools event was aimed primarily at 4th and 5th graders who can join the schools’ orchestras and bands this year.

School orchestra and band leaders with upper-class students, gave the elementary school kids quick lessons on how to hold, blow or strike the instrument in order to fit the student to the right size—a full-, or half-sized violin, for instance.

Sales and rental information was also available (rentals going first, and at reduced prices, to the families who need financial assistance most). Students handed in forms at the end of the night with their top three preferences. The schools make the choices about who gets which.

Christopher Wall, a 4th grader at Taylor Elementary School, was new to the school and the opportunity to get these music lessons, his mom, Beth, said. She added, he wanted to come to try the violin and the “kello.”

Welcome Back and See-ya, Mis Amigos! 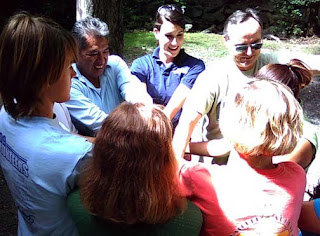 Amigos de las Américas volunteers, staff and hopefuls break the ice by holding hands and then "untying" the knot of people without letting go of each other. That's Sarah King, center. (Click to enlarge the image.)
A group, about 25 people, gathered under the Lubber Run Park pavilion Sunday afternoon to celebrate the return home of volunteers in the Amigos de las Américas program, and to recruit the next batch for nine-months of training before next summer's trip.

“We had 23 volunteers go down this summer, and all 23 came back!” said Sarah King, laughing. She is the president of the DC chapter of the national group.

The volunteers are at least 16 years old and have completed their sophomore year of high school as well as at least two years of Spanish instruction. After nine months of training in development, public health and organizational leadership, students go to countries such as Costa Rica, Mexico, Panama, Honduras, and Nicaragua.

“They work with partnering organizations [such as CARE or a country’s health administration] in the countries that they’re in,” Ms. King said.

They live with a person in a specific village and help with community-based initiatives. Arlington Public Schools sent six students this summer:

“Arlington county schools give us a lot of kids,” Ms. King said. Often half the students are from Arlington.

This was one of those times when I was caught unawares, as they say. I had no notebook, and only my cell phone to shoot photos. No Arlington students were at the event when I was there, or I'd have shot photos of them. I was watching my kids, though, so I only caught about 10 minutes of the event. --ST

Dine at participating Arlington restaurants and enjoy a dinner made with locally grown ingredients. Supporting local vendors strengthens our local economy. But supporting local farmers goes even further. You’ll be helping to keep farmland in production and your food is fresher when it was just picked the day before.

To keep your brain as full as your belly, come to our series of film viewings and discussions at Fairlington Community Center (3308 S Stafford St.)
Sept. 30--"The True Cost of Food"
Oct. 7--"The Garden"
Oct. 14--"FRESH"

All performances will be at the Kenmore Middle School Concert Hall, 200 S. Carlin Springs Road, Arlington.

March/April Concert date to be announced.

Thanks for the update on Buckingham!

I watched the new superintendent of Arlington Public Schools on his “APS Snapshots” video. (I missed it on TV, so I had to turn to the APS website, find it here; I had to download it in order to see it). 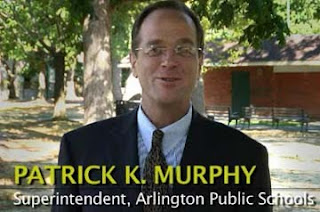 The press release for the video says that it was to be a view inside the school system, and this one wasn’t that really, more a welcome back speech.

He started his run as the schools’ chief in July after long-time superintendent Robert Smith retired.

This is Mr. Murphy’s first video for the weekly series.

One little irony: After saying that any achievement requires a plan somewhere behind it, he added, “One is: get organized.” It is important for children to collect their materials and find a quite space to complete homework and to stay on top of assignments. Parents can help with daily reminders or nudging children to organize their academic lives and establish a routine.

(I mean, if you’re going draw up a plan about planning and you say, “One,” shouldn’t you say, “Two”? If not, you sound disorganized!)

I’m looking forward to next week’s episode and am even hoping for a little more meat. It’s a great bully-pulpit, the superintendent should use it. I’d love to get some behind-the-scenes footage, or a clearer understanding of decisions.

According to the APS Web site, “APS Snapshots” is filmed and produced by the Arlington Educational Television Department (AETV) in cooperation with the Arlington Public Schools Department of School and Community Relations.

B'ham high schoolers to present at Housing Commission, County Board...
Buckingham Youth Brigade members at a June meeting. (Click to enlarge the image.) 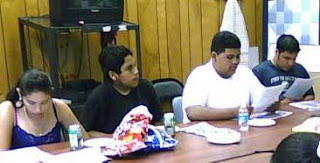 The Buckingham Youth Brigade will present its report on immigration and affordable housing to the Arlington County Housing Commission next Thursday and then to the County Board on Saturday Sept. 26.

The group of high schoolers took on the task of interviewing immigrants, their families and random people in Buckingham as part of a larger research project answering the question, “Who are Arlington’s Immigrants?”

The idea for the 12 page report started at the end of last year during the county’s “Diversity Dialogues.” The group’s findings boil down to three major recommendations: improving access to services for immigrants; improving affordability in housing; and preventing racism and promoting understanding.

I’ll have a larger story on this the week after next.

The BYB is funded by and supported through the BU-GATA Tenants Association. The report was funded by BU-GATA and the Arlington Community Foundation Education Trust.

Champagne, pizza and missed names...
This story was edited to include the names I missed. --ST

There’s nothing quite like a wine-and-cheese function at an arts space to just make you feel creative and energized. The third Creative Arlington meeting in the Tiffany Gallery of Arlington Arts Center on Thursday did just that. Didn’t hurt that the cheese was on pizza provided by Liberty Tavern and the wine was a sparkling Italian champagne.

Ted Bilich in the Tiffany Gallery. (Click to enlarge the image.)

The group aims to bring the different “creative classes” in Arlington together to create a stronger economy. The idea is to have a community online (find it here—it’s open to everyone, even people without arts degrees) that meets regularly in person to mingle, exchange ideas, and to see if some synergy can be created.

I was not planning on covering this, just went for the fun, but at the last minute, I tried. Cell phone photos, notes called into voice mail, and I missed a name: that of the Doorways representative. It was Kerri (Kerry? Carrie?) Something. Coming back off a hiatus is always way harder than I think it will be. (If Kerri Something wants to let me know her real name, I would love to post it.) Took a few hours, but she is: Kerry Goldstein, Donor Relations Manager for Doorways.

Stephen Fedorchak of Liberty Tavern was there, and he and Ms. Goldstein talked about just the sort of relationship Creative Arlington is trying to make.

Doorways is a shelter for abused women and children; Liberty Tavern is upscale food at moderate prices. They share a building in Clarendon.

The two have worked very closely, and Doorways has changed its philosophy of how it works with companies after its experience with Liberty Tavern.

“We want to work with you…It’s not just about writing a check,” Ms. Goldstein said. She said they now ask, “How can we help you, to get your name out, to get your word out?”

Returning that sentiment, Mr. Fedorchak said, “A restaurant is uniquely positioned to feed those children in a nourishing ways.”

Mr. Fedorchak’s business will be expanding into the former Murky Coffee building at the corner of Wilson Blvd. and N. Fairfax Drive in Clarendon. He said they plan to keep it a coffee shop, with expanded hours and menu.

He said they plan to “Tri-brand” a coffee—Counter Culture, Doorways, and whatever his coffee company will be called (he’s taking suggestions)—and $1 per bag of that coffee will go to Doorways.

Doorways recently started the PAWS animal rescue shelter with Caring Hands Animal Hospital for the pets of abused women—women often won’t leave without their pets, for fear that the pet will take the abuse.

“We’ve had one animal in our animal shelter so far, and unfortunately, he tore the thing to shreds, so we had to start over again!” she said, laughing.

My two cents: the new coffee shop should be called "Gitcher Coffee."

Headlines since the last HeraldTrib Today:

Sept. 2: Destruction of Property (Series), 4100 and 4200 blocks of N. Henderson Road. Between 2a.m. and 7a.m. an unknown subject vandalized at least two vehicles by damaging the windows. There is no suspect description.

Sept. 6: Destruction of Property (Series), 500 block of N. Glebe Road. Between 10p.m. on Sept. 6, and 2p.m. on Sept. 7, an unknown subject scratched three vehicles inside a dealership showroom.

Click the icons and lines for more information. Red=Person-to-person crime; Yellow=person-to-structure or vehicle crime; Blue=stolen vehicle or vehicle tag; Purple=vehicle-to-vehicle crime; Aqua=miscellaneous. A dot in the icon indicates more than one suspect or victim. All place marks are approximate. Click here to view larger map.

Aug. 29: Robbery, 3800 block of N. 9th St. At 12:45a.m., an unknown male approached a woman from behind and stole her purse. The suspect fled into a waiting silver Volkswagen Jetta. The suspect was a white Hispanic male wearing jeans and a grey sweatshirt.

Aug. 30: Possession with Intent (Arrest), 5500 block of Arlington Blvd. At 12:30a.m. when an officer attempted to stop a vehicle for a traffic infraction, the occupants threw narcotics from the window. The three suspects were arrested. Tuan Huang, 28, of Annandale, Dat Nguyen, 26, of Woodbridge, and Nguyen Nguyen, 25, of Gainesville, were all charged with Possession with the Intent to Distribute Cocaine. They were each held on a $3,000 bond.

Aug. 31: Peeping Tom, 4100 block of N. 3rd Road. At 12:45a.m. a woman saw a man looking in her bedroom window. The suspect is described as an African-American male wearing dark clothing.