County police ususally do not ask about citizenship, but the County Sheriff must, by state law. ICE sees jail as a convenient way station for detainees.

Arlington County Police will not ask people they stop or arrest if they are United States citizens, in most circumstances, but the Arlington County Sheriff’s Department will. By Virginia law they have to. What might be most surprising is that the detainees answer. Truthfully.

“I would say 99.9 percent of the people will be honest in their responses,” said Maj. Susie Doyel, director of administration in the Arlington County Sheriff’s Office. She said those arrested probably think the sheriff will figure it out anyway, but that might not be the case. In fact, they are not really going to investigate it. 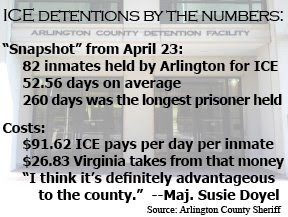 However, the “born in Germany” response would require the sheriff’s department to run the person’s name through Immigration Alien Query, a database, and send the name on to federal Immigration and Customs Enforcement if the name is flagged.

At that point, another form would be sent to the state police via the Central Criminal Records Exchange, a warehouse of criminal data run by the state police. If ICE is interested in the person, they will ask Arlington County to hold that inmate for 72 hours.

On any given day, the county might be holding 75 to 90 inmates for ICE, Maj. Doyel said.

A snapshot look at the inmates from April 23, showed that the county held 82 inmates for ICE, with an average stay of 52.56 days. One person at that point had been held for 260 days, more than eight months, according to figures released by the sheriff’s office. But those numbers are a bit misleading as most of those inmates likely were neither arrested in, nor had been living in, Arlington, said Maj. Doyel.

Ernestine Fobbs, a public relations officer for ICE, said her agency often uses the Arlington jail as a layover space because it is so close to federal offices and courts.

“Our numbers [of detainees] have gone up since this whole immigration thing has gone up,” Maj. Doyel said, referring to the crack-down on illegal immigration in Prince William County and elsewhere in the state and nation. ICE is using Arlington more, partly because of the location, and partly because Arlington has space.

Although the jail must first be used for local incarcerations, it can be used for federal detentions, too. Arlington not only houses inmates for ICE but for the U.S. Marshalls Service at $91.62 per day per federal inmate. The state takes $26.83 of that money. That compares to about $8 per day the county gets from the state for housing local inmates (the state also pays other money such as portions of salaries).

On average, the county spends about $146 per inmate per day, but the average drops with each additional inmate, so long the jail remains under about 650 inmates, Maj. Doyel said.

“It’s [the federal money is] just helping to offset our costs that we’re going to have anyway,” Maj. Doyel said. “I think it’s definitely advantageous to the county.”

At a recent meeting in Buckingham, Arlington County Police Officer J. Mike Lutz, said he knew of three people who had been deported after being arrested near the corner of N. Glebe Road and N. Pershing Drive. The only details available on this so far are that the arrests happened last year.

The county cannot release the names and most recent addresses of the inmates without approval from ICE, Maj. Doyel said. [That approval is in process. –ST]

So it is impossible to know at this point how many people in the Buckingham neighborhood have been detained for immigration reasons.

How anyone might have ended up being held for ICE is a bit complicated. The Arlington County Police Department will not ask people about their countries of birth, generally. “We don’t stop everyone and ask everyone what they’re immigration status is,” said John Lisle, a spokesperson for the police. Police will not enter a person’s name into the IAQ database for routine traffic stops and other minor offenses.

But they will enter the name when people are arrested for violent felonies, for suspected human trafficking, for violent gang activity, and for terrorism or some other major crimes.

If the person self-identifies as having been born outside the United States, the police will run the name through the database.

Anyone who is incarcerated at the county jail will be asked about their country of birth, and the names of people who say they were born outside the United States will be run through the various databases by the sheriff’s office at the time of the person’s booking.

But what happens if the inmates do not identify themselves as from another country?

“That’s the sticky question right now,” Maj. Doyel said. “If you don’t speak one lick of English, we have to report that.” And if police find a passport from another country, the person must be reported. There is little else to go on. And probable cause for running a name through the database remains unclear, and skin-tone will not cut it, she said.

Once inmates have been flagged by the IAQ or other databases, the clock starts ticking. The county notifies ICE and the Virginia state police. The state police do little with the information other than catalogue it and send it on to ICE themselves, a spokesperson said.

ICE has 30 minutes to respond to the sheriff’s office. If the sheriff does not hear from ICE in that 30 minutes, and the local charges have been dealt with (for instance, the person has made bail), then the person can go.

If ICE responds in the first half-hour asking that the person be held, ICE then has 72 hours to determine whether to press charges. Again, if that time passes and ICE does not respond, the person will be released so long local charges have been dealt with.

According to Ms. Fobbs, local jurisdictions can decide how they want to identify potential illegal aliens. But once ICE, as the investigative arm of the Department of Homeland Security, is notified, they will investigate, and if necessary will detain individuals on charges of immigration violations.

“We [ICE] make the final decision as to whether that individual is in the country illegally or has some status in the United States,” Ms. Fobbs said, adding that an immigration judge will rule in some cases.

For her part, Maj. Doyel said she thought ICE is much more likely to have Arlington hold them if the person is to stand trial.

“It’s much easier [to deport] them if they have been convicted,” Maj. Doyel said.