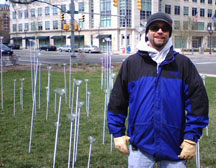 Take the art, go ahead.
In a piece called “Give and Take” sculptor Cory Wagner pushed into the front lawn of the Arlington Arts Center, over 150 thin, steel poles with plastic bowls atop. In the bowls are phosphorescent balls—they’ll glow at night—which Mr. Wagner expects people to take.
I caught him as he was installing his piece for the latest
Sculpture on the Grounds, which lasts through most of September (the opening is Friday, 6 to 9 p.m.).
He said the theme of the show is “Disintegration,” which put him in a quandary—he uses plastic, which doesn’t disintegrate, at least not fast enough. So he came up with the idea that he should make a piece that could be taken. And, if you feel generous, leave a little something in the bowl. He would prefer no bottle caps or trash, he said.
It also fits with his need to reuse materials.
“I always try to do this recycling thing,” he said.
The balls will glow at night like the stars, and the balls (they’re small and “kind of pathetic in a way”) represent sports and games, all which should fit into thoughts of childhood dreams, which if you’re following along, disintegrate too often when we grow, he said.
The other two pieces in the show look equally interesting. Margaret Boozer has an installation of different colored clays that will slowly disintegrate and run as the rain comes. Michele Kong has taken the grass behind the center as a space to draw abstract lines with the same paint used to demark soccer fields.

++++++++++
Lubber Run’s Eggstravaganza
I know Carol Hoover, the director of the Lubber Run Center and all of Section 2 of the county’s parks, will get back to me when I write this (since I know she reads this and is a big fan of all things Buckingham), but I must admit that I was a little disappointed at the Lubber Run Eggstravaganza Saturday, a holiday celebration sponsored by the county’s Parks, Recreation and Cultural Resources Department and the Arlington Jaycees. A $3 entrance fee per child was collected.
The event was fun, and my kids had a blast with all the carnival toys. The egg hunt, in the cold of Saturday morning, was a big hit, and my kids are wearing the rings and everything else that came in the little, colored plastic eggs. The Easter Bunny had scattered about 1,000 of those eggs all over the lawn and playground at the center, and all were collected within four or five minutes, including the handful of golden eggs which won the children who found them a nice little basket.
I’m disappointed because I only found out about it on Friday, late afternoon, in an email from Pat Hope, the Buckingham Community Civic Association president. I met people from far-flung Arlington neighborhoods and from Falls Church (see the photo) as well as Buckingham, Ballston and Arlington Forest. I’ll admit I’m upset because I was feeling a little left out, and I was just wondering how it was advertised. I’m sure there’s a web site posting that I missed, or an email that went everywhere but to me. Still, I’d love to know how this was told to the community, and how I missed it. 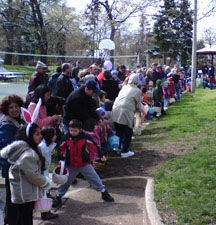 [Kids and families wait--just barely holding back--for the start of Saturday's "Eggstravaganza" at Lubber Run Center last, chilly, Saturday.]
++++++++++
Can this be legal?
For the last couple of weeks, someone—I’m guessing it’s construction workers at the Gates of Ballston—has been running extension cords across Pershing Drive. 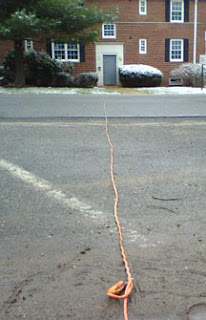 ++++++++++
Police Notes for Buckingham
Two weeks in a row and nothing to report, according to the police (excellent!).