As crews rip out trees and prepare to knock down buildings along Henderson Road, the time is right for a recap of the plans for Buckingham Village 1. (Plus, inquiries have made it to me, and I realized I do not have a post that ties it all up in the way I hope this one will. –ST)

First, a layout of the land is in order. Take a look at this map: 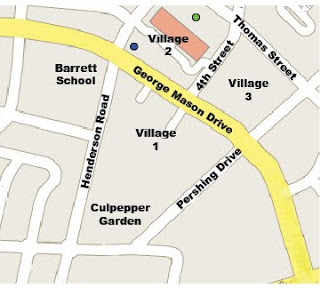 Village 1 is the home of current tree removal across from Barrett Elementary School. It’s the largest of the three villages, and when completed will have over 500 rental units in two large buildings, about 70 townhouses along N. George Mason Drive, and a small county park.

Village 2 is the only divided village. The road down the middle of the village along with the red rectangle showing the approximate placement of the George Mason Apartment complex (which is not part of the original Village 2), separate the other two thirds of the block. The blue dot shows where the townhouses have been built and are under construction. The green dot locates the fenced-in field along Thomas Street. Dozens more townhouses are planned for both sides of Village 2. This village is developed “by right” meaning that Paradigm Construction need not seek county approval for changes, so long they stay within current zoning rules.

Bought by Telesis Corporation just months ago, Village 3 will change little on the outside, preserving the two-storey buildings and the garden-style setting. Some additions will be added to the backs of buildings, and a building of some sort will cover the entrance to an underground community center. This village is protected as a county historic area and falls under the oversight of the Historical Affairs and Landmark Review Board, which will regulate any external changes to the property. All of the units (about 140) will be affordable to people of various levels of income. Some of the units along N. Pershing Drive will be part of a condominium.

Village 1 will undergo the most changes, and for more details on that, peruse the illustration: 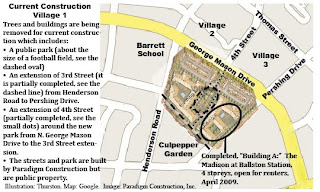 Although future plans can change, Paradigm is locked into the current arrangement of buildings in Village 1, given contracts signed with the county. Here are a few details: 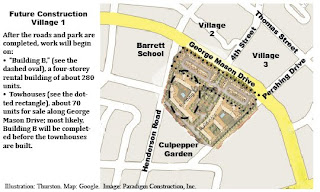 No names at the fair?...
Doug Galbi at the Ode Street Tribune, a blog in Rosslyn, noticed an odd fact at the Arlington County Fair: all the names on the competitive exhibits—e.g. the vegetables and photos—were nameless. Numbers only from August 19-23.
Photo courtesy of the Ode Street Trib. (Click to enlarge the image.) 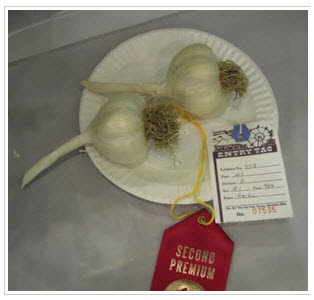 Turns out the Arlington County Fair Board of Directors voted this year to take the names off tags for security reasons.

Given that 30,000 people perennially partake of this rite of summer, those concerned about the people's privacy were most concerned about children’s. Removing only the names of the littlest competitors proved too much, she said. “The fair is a lot of work” for the all-volunteer staff.

She reminded me a number of times that they are a volunteer organization, and as such, things can go wrong, especially when trying to communicate an idea from a board decision down to the person writing the name on the tag. They were nervous of inadvertently printing a child's name.

Plus, the tags are pre-ordered from a company that provides these sorts of items for fairs. They come with pre-printed numbers and spaces to write in names and addresses—part of the fear was it would take a lot of communication to make sure only the allowable information was put on the tags.

Oddly, even the winners did not get their names on anything official from the fair. Again, numbers only.

Ms. Roller said she hoped they would change that idea next year and give the winner a certificate, not just the nameless ribbon.

My take: put the names back on. I know it’s a lot of work (at least, I can imagine that it must be), but names with neighborhoods, it would seem to me, would be less intrusive while still letting us see who won. Figure out a way to do that.

When kids at the schools win something or other we get their names, and I always like seeing if I know the children. I have two elementary-aged children of my own, and I just do not understand the fears. I just don't see child abusers making the leap from viewing a pumpkin to stalking a child.

I wonder if it would be possible for people to fill in their own tag.

I was very happy to see Lebanese Taverna at the fair—I’d love to see more of the tastes of Arlington (while retaining at least a couple funnel cake and corn dog joints) at the fair. 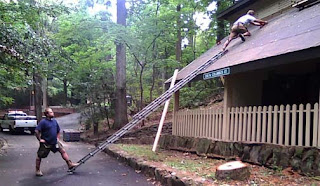 Desperate joggers, dog-walkers, and stroller-pushing parents will have their rest room back soon. A tree had severely damaged the roof of the Lubber Run Park rest room about a month ago, making the building unusable. The roof is getting repaired and reshingled.

Well, I’m back. This was a much longer hiatus than planned, and for that I’m sorry. One of the reasons for the delay was that I’m trying to reconfigure this blog. I would like to make some money, and to write some different stories. Finding time for all of that is always the concern. In the summer there are kids (and I love getting away on vacation), but then during the school year, I have students, students, students. Finding time is the sticky wicket.

Still, I have some ideas for changes: 1, I am in the process of moving the blog from Blogger to a company called “neighborlogs.” They are out of Seattle, and their business plan aims to bring local advertising to local blogs. It’s a plan that is a long shot, but its heart is in the right place. 2, I’ve finally gotten a tag line: “News Worth Reading.” I’m thinking of it as part fact and part aspiration. The object will be to improve the stories I’m writing, maybe writing fewer but more complete stories.

Headlines from Earlier in the Week:

Aug. 18: Peeping Tom (Arrest), 100 block of N. Trenton St. At 6a.m. several witnesses reported a peeping tom to police. The suspect was located and arrested. Froylan Molina, 46, of Arlington was charged with Peeping into a Dwelling and Drunk in Public. He was held on an $1,800 bond.

These notes are compiled from Arlington County Police Department crime reports. They cover the reports from in and around the Buckingham, Arlington Forest and Ashton Heights neighborhoods. Today's post has a particularly large number of reports because it covers many weeks, including those of which I was on hiatus.--ST

July 2: Burglary (Series), 3200 block of Wilson Blvd. Between 10:30p.m. on July 2, and 8a.m. on July 3, an unknown subject broke into three offices in the same building. Various items were stolen. There is no suspect description.

July 12: Grand Larceny (Arrest), 800 block of N. George Mason Dr. At 11:50p.m., police stopped four subjects in possession of stolen bicycles. They were all juveniles, and charges are pending.

July 13: Robbery, 3800 block of Arlington Blvd. At 1p.m., a group of men approached another male and took money from his pocket while punching him. Several of the suspects are known to the victim.

July 14: Grand Larceny Auto (Arrest), 500 block of N. Thomas St. At 9a.m., an officer attempted to stop a man driving a stolen vehicle. The suspect jumped out of the car and fled on foot. The officer ran after him and took him in custody. Robert Williams-Dixon, 24, of Riverdale, Md., was charged with Grand Larceny Auto and Driving While Suspended. The subject was also wanted out of another jurisdiction for Assault and Battery. He was held on $3,500 bond for the Arlington charges, and a $1,500 for the other charge.

July 23: Attempted Robbery, 200 block of N. Columbus St. At 5:30p.m., a man was walking the bike trail near Lubber Run Park when he was approached by two unknown men. The suspects confronted the victim and demanded money. The victim chased the suspects off with a stick. The suspects were both white Hispanic males in their 30s. The first suspect was 5 feet, 9 inches, 190 pounds, had a goatee without a mustache, and was wearing a brown T-shirt, dirty jeans, and black shoes. The other suspect was 5 feet, 5 inches, 160 pounds, with long black hair, wearing a blue T-shirt, jeans, and white shoes.

July 31: Unlawful Entry, 800 block of N. Glebe Road. Between 8:30a.m. and 11:30p.m., an unknown person entered a residence and left the doors standing open. No items were stolen and there is no suspect description.

July 31: Exposure (Arrest), 200 block of N. Thomas St. At 7p.m. a woman saw a man exposing himself outside her window. Police located the suspect and he was disorderly. Geoffrey Harley, 25, of Washington, was charged with Exposure and Obstruction of Justice. He was held on a $5,000 bond.

Aug. 1: Robbery, 200 block of N. Piedmont St. At 9p.m., a man stated that he was walking when an unknown male brandished a knife at him, stealing his jewelry and a wallet. The victim’s story changed several times and he was unclear about a suspect description.

Aug. 3: Larceny from Auto (Series), 3900 block of Fairfax Drive. Between 5:30p.m. and 10p.m., an unknown subject broke into at least two vehicles, stealing GPS units. There is no suspect description.

Aug. 14: Assault and Battery, 4200 block of Fairfax Drive. At 3:30a.m. a man reported that he was a victim of an assault, but refused to give any further details.

Aug. 15: Sexual Battery, Lubber Run Park near 300 block of Park Drive. At 1p.m. a woman was walking her dog in the picnic area at Lubber Run Park when an unknown man approached her. He kissed her on the cheek and fondled her before she could flee the area. He was described as a white Hispanic male, between 45 and 50 years old, 5 feet, 9 inches, with a medium build. He was wearing a white T-shirt and khaki shorts.