Trying to get a jump on the party leadership and show, before the year is out, that he has the backing to be a serious contender for a spot in the Virginia House of Delegates, Miles Grant last night addressed a crowd of about 40 people at his campaign kick-off event at Piola, the upscale pizza restaurant in Rosslyn.
Miles Grant. (Click to enlarge the image.) 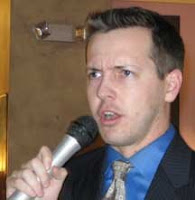 The crowd was a mix of Mr. Grant’s supporters and supporters of Raising Kaine, the left-leaning political blog that helped propel the election of Gov. Tim Kaine, Senator Jim Webb, and helped turn Virginia solidly Democratic in November. Lowell Feld and Eric Grim will stop the blog at year’s end.

Mr. Grant, 31, may face an uphill battle for the 47th district seat currently held by Al Eisenberg, 62. Both men are Democrats, but Mr. Eisenberg has not said if he plans to run again.

The primary fight for Mr. Grant this spring focused last night on the idea that Mr. Grant is not waiting his turn for the Arlington Democratic Party machinery to choose him, but to show the party that he should be chosen, especially if he can show good fund-raising numbers by year’s end. The official tally on the Act Blue web site where tickets for the event were sold shows that 39 people gave Mr. Grant nearly $2,900 for the event which included free pizza and some drinks.

The campaign's official numbers came out after I posted this morning. The campaign says about 70 people gave $4,000. The numbers would include pre-paid registrations and receipts at the door. --ST 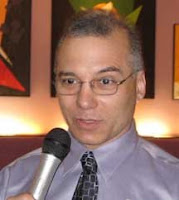 “This is a solidly blue district,” that does not have any chance of going to the Republicans, Mr. Feld said in his remarks. “It’s an opportunity to elect a strong candidate like Miles.”

Ben Tribbett, the lightning-rod blogger of Not Larry Sabato, said, “This is a wake-up call for these elected officials.”

He said that he would like Virginia to more closely study the economic effects of immigration on the economy as he is sure it would show that immigrants pay into many more services than they use.

As well, he would like to see more people integrated into community life, starting by bringing them together for happy hours or other mixers and from there encouraging volunteerism and finally getting them active in state and local politics.

And he said it’s time for Virginia to turn away from coal and look for alternate, cleaner sources of energy as fuel costs skyrocket.

He lives in the Historic Ballston Park Apartments in the Ashton Heights neighborhood.

Before the Democratic primary (or caucus) in June, the district might just be called “The Fighting 47th” as the rumor-mill is churning out names of possible contenders by the bucket. The district covers central and southern Arlington County.

(Disclaimer: Mr. Grant gave me a free-drink token, but I abstained for weight-related reasons. –ST)