Those of you paying attention may have noticed that I disappeared for awhile, and I fully expect my readership to take a nosedive for a couple of months. As I reported, I took a hiatus to watch kids during the summer and regroup for my re-entry into the world of teaching after a year-long sabbatical from Montgomery College.

Well, I am back to teaching, and I must say this working stuff stinks. I much prefer sabbatical, but what is one to do?

The other, rather unexpected, twist to this hiatus was that I am, no longer, a Buckinghamster.

I am now an Arlington Forester. This is my fourth home in Arlington since moving here in 1995, and moving into this house close to the Lubber Run Amphitheatre was the greatest distance I have moved: six blocks. Actually, the apartment that my wife and I first rented is about halfway in between here and the house we just left. We love this area, and now we have a garage. Honestly, we would have stayed in Buckingham, but there are just not that many single-family homes that become available, so we had to change neighborhoods.

People who know of the move have asked if I am changing this site, and I have said no. I have covered many issues of interest both to Buckinghamsters and Foresters, so I will continue along that vein. Now it is just a little longer walk to get to some of the best parts of Buckingham.

I am changing my main posting day from Wednesdays to Fridays, or maybe Saturdays. And I still have a lot of work to make up at my day job—not the least of which is a report on my sabbatical project (also known as The Buckingham HeraldTrib). I am tempted to email a link of the site to the muckitymucks and call it a day, but I might find myself on permanent sabbatical after that.

Despite being in our new house, we still have not sold our other house, and boy do we want to!

So, for the first time in the more-than-two-year history of the Buckingham HeraldTrib, I am running an ad, my own:

--Advertisement--
Three-level, three bedroom, two-full-bath townhouse in north Arlington. A nice walk to the Ballston Metro, on many bus routes, and a scant five minute drive to the Washington Monument (you can actually see the July 4 fireworks from the bridge over Arlington Boulevard a half block from the house). Walkable to everything you need: post office, salons, dry cleaning, groceries, pharmacy, restaurants, shops! Our community center has an exercise room and a party/meeting room. 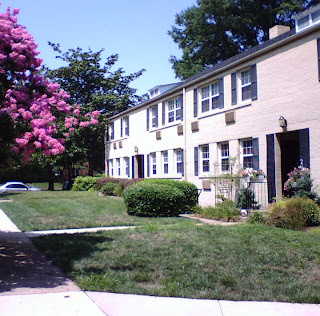 The fenced-in, private, back patio, shaded by mature oaks, opens onto a one-third-acre back courtyard (these open grassy spaces are what make Buckingham, Buckingham). We taught our kids to ride their bikes on the sidewalk that encircles that courtyard, and have played many games of croquet and bocce out there, too.

Renovations: both bathrooms were renovated recently and have very new fixtures and modern looks. The dining and living room sport newly refinished hardwood flooring (the original parquet from the 1930s!). The stairs to the top floor and all three bedrooms have brand new carpeting. The kitchen floor is also new. New paint just about everywhere.

THIS PLACE IS MOVE-IN READY.

A copy of this full flyer is available by emailing me (heraldtrib@gmail.com) or by visiting the house with your realtor. (Click to enlarge the image.) 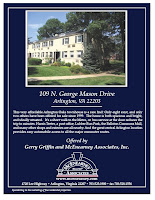 Arlington Oaks Condominium Association. $482,500. The $449 monthly association fees (one of the lowest in Arlington) covers, water, heat, outside maintenance and repairs as well as many inside repairs and needs.

Between house sales and moves, and a report that must be written, I am not exactly sure how regularly I will be posting to the site over the next month or two. After that, about the time of the holidays, I expect to be a little more operational (next summer, I am hoping to have interns!).

For now, I have but one piece to set your blood to boiling:

I keep asking myself why the country would want another set of mavericks in the White House. What is a maverick but someone who makes gut-based, go-it-alone, seat-of-the-pants decisions while shooting from the hip and asking questions later?

In the last eight years, this is what mavericks have gotten us:

Who needs more of this?

John McCain has called himself and been known as a maverick for years. He likes the moniker because it is supposed to make him look as though he thinks for himself and is tied to no special interest.

But a maverick’s gut-based decisions are not what the country needs now.

One of his first decisions as a Maverick Presidential Candidate was the choice of the “Alaskan Maverick” Sarah Palin. Her reaction to being asked was, of course, a thoughtless, gut-based, “I’m Ready!”

When asked in a town-hall-style meeting how she would handle foreign affairs if she were suddenly thrust into the presidency, the vice presidential candidate, who recently got her first passport, said, “I’m ready.” This was even before her chats with heads-of-state at the UN last week.

Next, Maverick John McCain suspended his campaign and called off the presidential debate to run to Washington to “fix” the economy, which he had never really paid much attention to, only to arrive in Washington, do little, and ultimately fail to bring his OWN party together behind their own economic plan.

Shoot-from-the-hip decisions miss the target too often. Give us a president who will take aim before pulling the trigger.