Sparrow Pond Dredging and the Unfortunate Beavers
For the first time in years, Sparrow Pond has been dredged as its maintenance requires and a couple beavers who had taken up residence there have been killed by the county as the law requires, said Greg Zell, the director of the Long Branch Nature Center which maintains the pond for the county.

A beaver dam at Sparrow Pond, on the W&OD Trail near the Long Branch Nature Center, is a threat to the trail as the dammed water erodes the dirt under the trail and could cause a collapse. In 1996, the trail ended up being used as part of the dam, and the Northern Virginia Regional Park Authority, which controls the trail, insisted that Arlington County remove those beavers and any future ones, Mr. Zell said.

“The law in Virginia is the beavers cannot be relocated,” Mr. Zell said. “It’s against the law to do so.”

So the county euthanized the beavers.

“Every other form of wildlife that might arrive is OK,” Mr. Zell said. [See the story about the 10 wood ducks, below.]

The lodges that the beavers form are part of the beaver’s dam. They are not the typical dome in the middle of the water. Mr. Zell said that the lodges are “a little bit of a disturbance” on the banks, a little pile of mud sticking out of the bank, and the beavers enter from holes under the water.

He said he knows of about five sets of beavers in the county, on Pimmit Run, and others in Four Mile Run.

“It usually doesn’t become a wildlife problem,” he said. These beavers might have meandered up from the Potomac River after being kicked out of their familial homes when they turned 2 years old. Usually Arlington County beavers stay only a short time since their food—trees, grasses and berries—quickly runs out or they cannot find a good place to make a home. They’ll stay two weeks or up to a couple months.

“They’re sort of hobos here,” Mr. Zell said. “They move in and out randomly.”

When the county removed the beaver dam in 1996, it also dug down the sparrow ponds, so that “we could still have a wetland,” Mr. Zell said.

The U-shaped pond is actually three-chambered. The first chamber, closest to the woods where the small tributary feeds it, is a “silt trap” which slows the water and large sediment drops out. The bottom of the “U” traps other sediments still in the water and the wet land, full of water plants, turtles and frogs, runs parallel to the trail and can be seen from an observation deck, Mr. Zell said.

The peninsula of land that forms the middle of the “U” is barren from the dredging of the sediment in the first chamber. The county waited for the very cold weather we had last month to dredge the first chamber, which needs to be emptied every five to eight years. Last year they couldn't do it because it didn't get cold enough. The heavy construction equipment does less damage to the ground when it is frozen, Mr. Zell said.

Within the next two weeks he plans to reseed the peninsula with a special wildflower mix, he said. 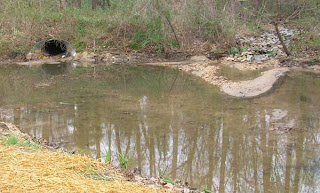 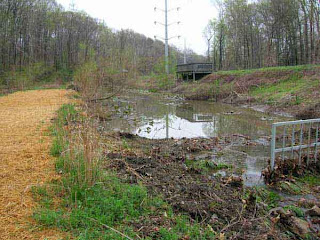 [The staw-covered, graded peninsula of Sparrow Pond runs parallel to the "third pond" where ducks, turtles and frogs roam. The busted beaver dam is in the foreground.]

++++++++++
More about the Wood Ducks at Sparrow Pond
I thought I had a good day seeing three sets of wood ducks. Greg Zell, director of the Long Branch Nature Center said he’s seen 10 (that’s five ducks and five drakes for you counting at home). Mr. Zell said he has cleaned out the duck box and threw down some new chips inside, hoping to keep one set to nest.

I’m wondering if a little mood music would work.

If you haven’t seen them, Sparrow Pond is on the Four-Mile-Run Trail about a half-mile north of Columbia Pike. It’s an easy walk from the Long Branch Nature Center. 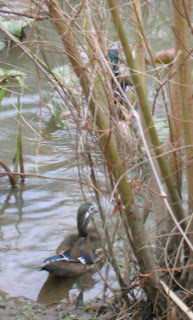 [A female wood duck follows her mate into the water at Sparrow Pond.] 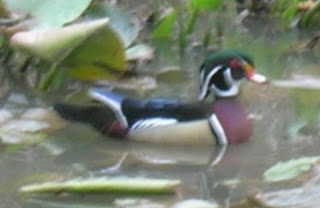 [A male wood duck paddles through Sparrow Pond. The blurriness can be blamed on photographer error!]

++++++++++
Meet the Robinsons
Brought the kiddies to see “Meet the Robinsons,” the new animated movie from Disney. It’s well worth the time and money. It’s the story of the orphan Lewis (hey, it wouldn’t be Disney if the parents weren’t dead or gone) a young inventor of nearly brilliant talent (if only his inventions would work all the time) and the boy from the future, Wilbur Robinson, who comes back in time to warn Lewis of “The Bowler Hat Guy.”

The two set off to find and stop Bowler Hat while learning the not-so-common kiddie movie theme of: "You’re stuck with what you got, and failure makes you stronger or can eat you up inside. Which it does is up to you." Gone is the orphan movie theme “your friends will be your family” and its corrolary: “your family is what you make it.” This one seems much more in line with a boot-straps attitude of “make what you have work for you.”

One caveat: explaining the concept of time travel and the space-time-continuum to 4- and 6-year-olds is mind-bending work. “He is both characters in that scene” is a tough sell for these guys!

One last item, the movie is based on the book “One Day with Wilbur Robinson” by William Joyce of “Rollie Pollie Ollie” fame.