This was my favorite part: Temple I, the comet that swings by earth every five years, was running from the “Deep Impact” NASA probe. She, that is Temple, hid behind planets and ducked behind Haley’s Comet while the NASA probe chased her around. At one point, they were pressed back to back, spinning trying to find each other.


Picture Bugs Bunny running around the tree with Elmer Fudd, or a dog chasing its tail, and you’ll get it. Judging by the laughter in the audience, they got it, too.


“Galactika” is a production of Arlington’s Classika Theatre and the powerhouse acting troupe at the Goddard Space Flight Center. OK, I’m guessing the NASA scientists provided the science and facts, while Classika provided the words, music and choreography. Still, it was a nice collaboration.


This “annual Title I celebration” was paid for by Title I funds, which are part of the mammoth “No Child Left Behind” federal juggernaut. Students from the dozen Arlington schools receiving the funds were entitled to go. They filled a little under half the seats in TJ’s auditorium, by my estimation, and there were as many parents as kids. The organizers who spoke were happy with the turn-out, but by the end, I was wishing there were way more kids.


Classika has partnered with Title I for seven or eight years, said Sheryl Leeds, the Title I supervisor for Arlington Public schools.


“It’s our partnership with Classika that let’s us have this evening tonight,” she said.


Every kid who came got a free book of choice (Reading Is Fundamental was there), and another in a goody bag of astronomical fun—stickers, mazes, tattoos, and cookies (I’m not really sure how M&Ms cookies are astronomical, but my kids weren’t complaining).


A dozen schools in Arlington qualify for Title I funds by having at least 35 percent of their students eating free or reduced-price lunches.


I have to shout out a thanks to Key’s Principal Myers who helped make sure my kids and I could go since I hadn’t responded in time with reservations. (I’m still embarrassed that I got her involved, as though she had nothing better to do. She’s a good egg.)

HALRB is Tasked with Pointing Out Historical Inaccuracies (Takes Issue with My “Boulevard” Remarks from Dec. 10)


I've enjoyed reading your blog and have been following it closely with regard to your comments on the development of Buckingham Villages 1, 2 and 3. Your comments are well thought through and I appreciate the time you have taken to follow and report on this controversial project.


In your recent posting you mentioned that members of the Historical Affairs and Landmark Review Board (HALRB) attended the recent SPRC meeting on Buckingham and said –
"Then the same gentleman (and I don’t have his name, or else I’d post it), said that he didn’t like the boulevard at the center of Scenario 8. His reason: Buckingham isn’t a boulevard community. Historically, we haven’t had boulevards in the neighborhood."


And then you took issue with the asserted conclusion that Buckingham is not a boulevard community.
You must be referring either to me or to Robert Dudka, the HALRB vice chairman, as we were the two male HALRB members who attended the meeting.


I don't think I mentioned anything about boulevards in my comments (but I wasn't following a script during my comments so perhaps it was me), so I assume you must be referring to some comment that Robert made. Regardless, I think I can speak for both of us in saying that we don't have any disagreement with your description of George Mason Drive as a boulevard, so I think you must have misconstrued Robert's comments.
Robert did discuss the reason why the HALRB believes that the street through the center of Village 1 is not compatible with the design of the rest of Buckingham, and I suppose that he described that street as a boulevard in his comments. [See the images below—Steve.]


The reason why the HALRB is opposed to the street bisecting Village 1 is that Buckingham was designed as a community with mega-blocks, with multiple buildings on each block and without streets on each side of the buildings. As part of the MOU process for Buckingham, the HALRB was tasked by the County Manager with making recommendations for the design for Village 1 to meet the goal of achieving a design that it is "sensitive to the historic context of the surrounding properties" in Buckingham as stated in the MOU.


In keeping with that tasking, the HALRB is compelled to state its concern that the bisecting street (or "boulevard" if you will) proposed in Scenario 8 for Village 1 is not compatible with the design of the other villages of Buckingham as well as the Arlington Oaks section of Buckingham.


The HALRB's assignment to make recommendations for a historically sensitive design for Village 1 also motivated our comments concerning the size of the buildings proposed in Scenario 8.


During the meeting Robert and I both spoke about our objections to the increase in size of the buildings facing Pershing Drive. Contrary to the comments in your blog, we have always recognized that "Paradigm Development Companies isn’t ever going to bring a plan to the SPRC that has 20-odd two story buildings" as you point out in your comments.


However, Paradigm did bring a plan to the SPRC that proposed three-story buildings facing Pershing Drive, and that plan was the Scenario 2 that was presented to SPRC and the HALRB prior to Scenario 8. HALRB raised an objection to Scenario 8, as we specifically explained during the SPRC meeting, in that the increase in size (or "massing" or "scale" - similar concepts that we used during our comments) of the buildings facing Pershing Drive made Scenario 8 a less historically sensitive design than the previous iteration of the design submitted by Paradigm as Scenario 2.


The HALRB recognizes that there are multiple interests that the county must weigh in determining which design is best for Buckingham Village 1, and that historic sensitivity to the rest of Buckingham is only one of those interests. Our task, however, is to make recommendations regarding historic sensitivity and we will leave it to the county manager and county board to weigh the other various interests.


I stayed around after the SPRC meeting to answer any questions concerning the HALRB's recommendations and would have been happy to address the comments you ended up posting in your blog. In the future, please feel free to email me or call if you have any questions about the HALRB's position on Buckingham or any other issue.


I'll keep my fingers crossed that you get a confirmed sighting of a northern goshawk in Buckingham! 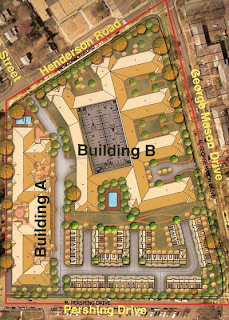 Building A: Five stories; the ground floor is a parking garage with windows and other detailing to make it look like living space.

Building B: Four stories; the above-ground parking garage in the central courtyard of the buiding is four stories, and would not be visible from the streets surrounding the building.

All buildings have peaked roofs (not flat) similar to most buildings in Buckingham. 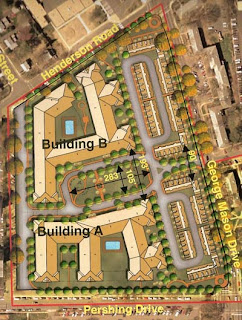 Buildings A and B: Four stories, with underground parking.

All buildings have peaked roofs (not flat) similar to most buildings in Buckingham.

(All images provided by Paradigm Development Companies at the December SPRC meeting.)

Is Affordable Housing What the Community Wants?

I enjoy reading your blog. It keeps me well-informed about the Buckingham neighborhood, in which I reside. Keep up the good work.

Last evening (Tuesday, Dec. 12), Pat Hope [the Buckingham Community Civic Association president] presented the new Buckingham Neighborhood Conservation Plan to the Arlington County Board. After holding a public hearing, the Board unanimously approved the Plan, which was item number 41 on the Board's agenda.

I informed the Board during the public hearing that the Plan recommends that the County preserve Buckingham Villages 1, 2 and 3. (The plan actually recommends that the county add the three Villages to its Buckingham Historic District). I noted that this is no longer possible for Village 2 (which Paradigm Development Companies has demolished), but expressed my desire that the county's current Memorandum of Understanding process would fail. This would permit the county coard to add both Villages 1 and 3 to the Buckingham Historic District.

I also informed the board that crime has recently decreased in the Buckingham area, as stated in the plan. I stated that parts of the "affordable" Gates of Ballston are now unoccupied because of the apartments are being renovated. I suggested that this may account for the recent decrease in crime.

Board members' comments following my statements suggested that the members had different views. One board member asked staff why the Buckingham neighborhood survey asked questions that were apparently different from those that surveys for other Neighborhood Conservation Plans have asked.I also stated that the plan identified the intersection of N. Carlin Springs Road and N. Glebe Road as being especially dangerous to pedestrians.


[I'll point out here that the BCCA has never taken a stance on the affordable housing issue regarding Buckingham Villages. BCCA's position has been one of historic preservation of the buildings and neighborhood. --Steve]

Since August, I’ve gotten quite a few emails, mainly positive, from readers. I haven’t posted them because they just tended to say, “Thanks for doing this,” or something similar. As much as I appreciated the kind words, I didn’t feel right posting them (though I’ve kept a bunch in my inbox!). I guess I just didn’t want to toot my own horn.

I’d be very happy to post emails that deal with the issues of Buckingham or Arlington in general. Drop me a few electrons: heraldtrib@gmail.com.

Finally, notice that little letter icon, too, that lets you forward the Herald Trib to an interested friend—feel free to use that all you want!